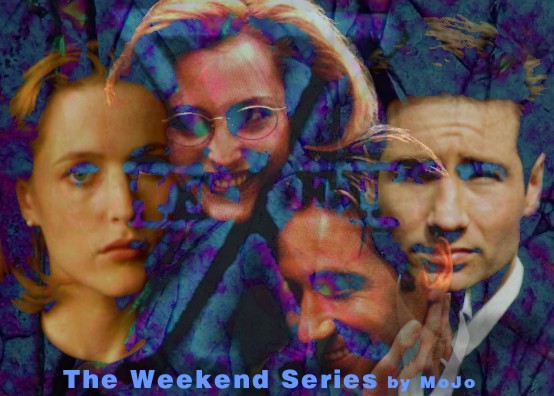 
Perception of Snow
Rated NC-17.
The beginning of the relationship, set on Christmas Eve.

Night of the Gunmen
Rated R, Humor.
Mulder and Scully's plans for the evening are thwarted by the Gunmen when an old case surfaces.

Luck of the Irish
Rated NC-17, Humor.
Scully has an unexpected stroke of luck for 24 hours.

Touch of Spring
Rated R, Humor.
Scully visits her mom, and learns something from Melissa.

Picking Up Pieces
Rated R.
The aftermath of reclaiming the X-files after "One Son".

58 Minutes, 15 Seconds
Rated R.
During a busy day, Scully has lunch with Mulder.

Nocturne with Andie
Rated NC-17.
In Chicago, a mysterious series of kidnappings draws Mulder and Scully into a dark plot of revenge and retribution.

Prayer for the Dying
Rated NC-17.
Faith and science intermingle during a case in Denver. And a new concern.

Afterburn
Rated NC-17.
Mulder and Scully delve into past X-files as they try to find out who might be watching.

Lucidity
Rated NC-17.
Mulder and Scully follow the trail left by Fowley and Spender to Alaska and find some answers.

If you've enjoyed this site, please consider making a small donation toward its upkeep.
All moneys received will go directly to paying for site space in order to keep the archive open.
We maintain these pages because we love the fic and we want them to stick around a while.
Thank you for your generous support, in every sense of the word.

The X-Files belong to Chris Carter, 1013 Productions, and FOX.
No copyright infringement is intended, no monetary profit is made.